Upstream: Solving Big Problems to Thrive in a New Era of Doing Business 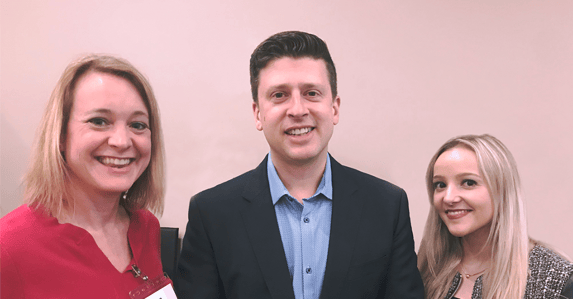 I have been a huge fan of the work of Dan Heath ever since I read his seminal book on communications, Made To Stick (I ask new team members to read this book whenever they start work at Benecomms).

Recently, Julianne and I had the pleasure of meeting Dan in person after a speech he made at Duke University. During the event, I had the opportunity to snag an early copy of his latest book, “Upstream: The Quest to Solve Problems Before They Happen.”

It is an excellent book I would recommend to anyone. Due to be in stores this week, the lessons in this book are critical for business leaders who want their organizations to thrive in the new era of doing business. Here’s a preview:

Break the Cycle of Downstream Thinking

Heath starts the book with a parable…You are by a river with a friend and suddenly you see a child carried downstream, flailing and drowning. You both jump into the rescue. But as you are saving the child you notice another drowning not far away. So, you swim to save her. But then another struggling child drifts by, and another. Suddenly, your friend leaves your side, making his way out of the water. You feel angry to be left alone until he says, “I’m going upstream to tackle the guy who's throwing all these kids in the water.”

Too often in society as well as business we get stuck in the cycle of response, handling problem after problem, preventing us from taking the time to fix the systems that caused the problems. The point of this book is to remind us of this fact. As a nation, we glorify the rescuers, the medics, the ones doing the work downstream. And while they should be celebrated, we have forgotten to move upstream.

We have become experts at fishing out the drowning kids, but we could do better.

Upstream work usually isn’t glamorous or visible. It is tough, behind-the-scenes, often difficult to measure and hard to communicate. But to go upstream is “a declaration of agency.” It is saying that we will no longer accept being subject to forces that drag our companies or our society down. Without this work, we are stuck in a cycle of response that isn’t anywhere close to as effective at begetting real change in our organizations and our world.

Heath asks: “Can we learn to re-engineer the machinery that creates problems? And, in the process, can we improve the odds that the problems will not arise in the first place?”

This question is important for all organizations.

Heath references the story of Expedia, whose employees had been conditioned to accept that, despite the fact this was supposed to be an online business, hundreds of thousands of customers called the helpdesk annually.

It turns out that a few important tweaks to the user experience changed everything, saving the company millions of dollars. All it took was for one leader to question the status quo. He formed an interdisciplinary team to tackle the issue, and then empowered them to do so.

Breaking the cycle of downstream thinking is just as important (and possible) for governmental and social service organizations. Indeed, as Heath points out, often the tragedy of well-meaning in the social sector is that leaders tacitly accept the flawed system that begets their work.

Heath cites his experience working with leaders of a foundation aimed at helping low-income people by offering, among other things, financial coaching. But the people served were not poor due to lack of financial savvy, they were poor because they lacked money, products of a region and system with limited opportunity. Had they been born elsewhere they likely would have earned income sufficient to survive subpar budgeting skills.

Meanwhile, follow the money through the foundation’s investment managers, the six-figure earning executives, the managers, the academic evaluators, and the coaches, you realize that everyone in the ecosystem got paid except the low-income people. They got coached.

Again, this is not to say that downstream work is not critical. It absolutely is. But can businesses and organizations learn to do both? As Heath puts it: “Part of every…organization’s mission should be to push upstream. To prevent the wounds as well as bandage them.”

Pluck Your People Out of the Tunnel

The causes of poverty, perhaps our largest problem as a society, are underpinned by issues that are not isolated to the poor alone. They impact us all, our businesses and our lives.

A common misconception about poverty is that it is a result of a chain of bad decisions made by the poor person. While there may be truth to this in some instances, many studies now show that we’ve got the causation backward…scarcity impacts the mind and the body. It leads to short-sighted financial decisions and reduces a person’s cognitive capacity as much as does going one full night without sleep.

Scarcity – whether scarcity of money, food, or time -- reduces the ability for executive thinking and keeps people tunneling, trying to keep up. People who are tunneling cannot engage in the systems thinking necessary to affect change. This is true across the board, in all walks of life. Breaking the cycle of downstream thinking to solve the big problems in an organization or society means you must first empower people to stop digging and start asking if the direction they are headed is the right one.

The challenge with upstream problems is that they tend to lack owners, and without ownership, these problems cannot be solved.

Heath tells the remarkable story of Ray Anderson, the founder of industrial carpet firm Interface, who had grown his company from nothing to $800 million in just a few years. But after reading Paul Hawken’s book “The Ecology of Commerce,” Anderson realized he had to question a fundamental question that many in industry have yet to ask:

Does building a strong and successful business necessitate being a polluter? Can we fix the environmental problems we have caused, and run our business differently to be beneficial both for our shareholders but also for the planet?

To successfully tackle these issues, Anderson had to take ownership of problems that are normally considered outside of the purview of a CEO. He asked why could he not be accountable both to shareholders as well as to his community? He had to question his own role.

Forty years ago, a group of pediatricians did the same thing. An article published in a pediatric journal about the deaths of children inside automobiles spurred a Tennessee doctor to take ownership of the problem, even though such things were not considered under the purview of doctors. His work on the state-level to mandate the use of car seats led to nationwide laws that four decades later, have saved the lives of thousands of children. From 1975 to 2016, the lives of 11,274 children under the age of four were saved by car seats.

Bringing this back to business and our daily lives, Heath tells a story of an executive coach who was called to solve a dispute between two colleagues in her organization. She bought them into her office and said, essentially:

‘I’m accountable for this…I knew there were problems between the two of you and I chose to do nothing. Now, I’d like each of you to tell the story of this situation as though you’re the only ones in the world responsible for where we are.’

As a society, we are quick to point the finger at a lack of personal responsibility when it comes to, for example, the issue of poverty and those who suffer from it. But why don’t we ask from our leaders what we ask from those who are most vulnerable?

What if business leaders told the story of poverty as if they were the only ones responsible? What if they told the story of climate change in a similar way? Heath asks, what if we all did this in our daily lives? How much better and stronger might our personal relationships be, our communities and our society?

Accountability is not the only solution, but it is the first step. Without it, we cannot hope to solve the big problems that plague us.